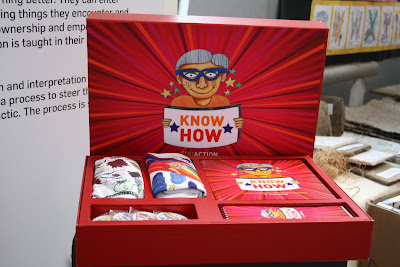 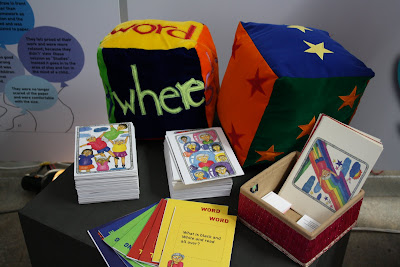 Posted by MANASI LAMBA at 3:09 AM No comments:

'Make kids creative by changing the way they are taught'

"If we want our children to be creative, there is an immediate need to change the way we are teaching them," said Kerala-based educationist K B Jinan. He was in the city recently to talk about why the present education system needs a paradigm shift to retain the creativity of children.

Jinan has been documenting the behaviour of children in rural as well as urban settings in places like Nagaland, Bihar, Orissa and now Kerala. He has been studying the differences in the behavourial patterns in these different settings and has reached the conclusion that teaching children through strictly structured curriculum makes a child lose his natural creative ability.

"I have interacted with children in the slums of Hyderabad and have found the astonishing fact that most of the children there can fluently speak at least four languages such as Kannada, Tamil, Telegu and Hindi. However, they do not have any teacher to teach languages. It is simply their ability to grasp what they are watching and hearing. It is such a cognitive process and there is so much of natural learning taking place here," said Jinan.

He said learning is a more biological realm whereas teaching is psychological, thus both the processes belong to two completely different paradigms. "We impose set rules on children, thereby disturbing their natural learning process. What I feel is children are more innocent, open and humble who do not know anything about the vices of that it is we who should learn from them," he said.

Jinan is an engineer and did a course from National Institute of Design (NID). He says his outlook towards education changed when he was at the NID. "NID is a place where students are not taught. They are just left to be and that is where they come up with the most amazing designs. You take responsibility for what you learn. You think, you read, with no external pressure. We need to have similar teaching processes for children. Our system needs flexibility."

Jinan also said since after parents, a child spends maximum time with teachers. "Children are being taught skills of reasoning and memory in schools, which are useful for analysing what is known. But what about the unknown? A child's creativity is getting killed with the old methods of teaching. The brain is getting used to static memorised information. What we need to do is to let them learn naturally. That is the only way how their creativity can be retained."

Posted by MANASI LAMBA at 10:14 AM No comments:

I was just having fun with the layout wanted it to be like a journal.
Posted by MANASI LAMBA at 10:35 AM No comments: 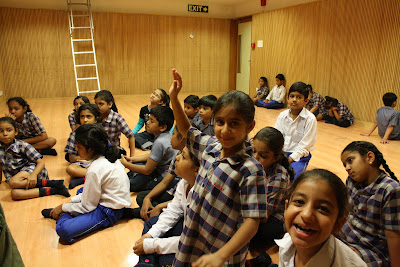 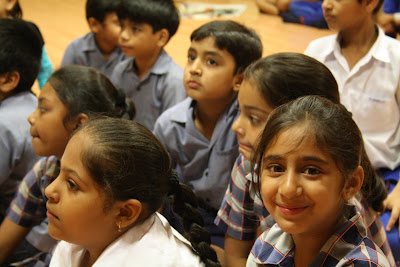 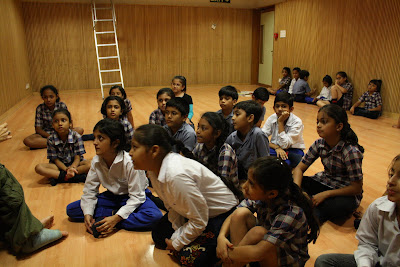 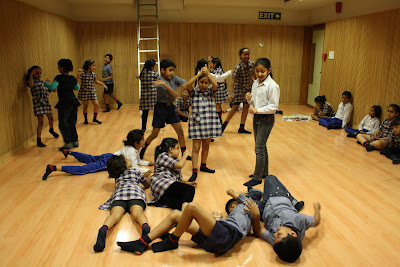 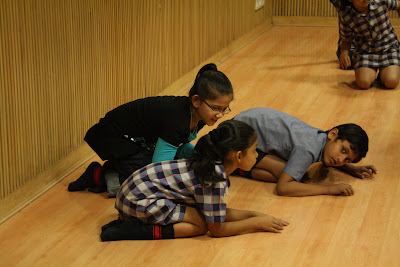 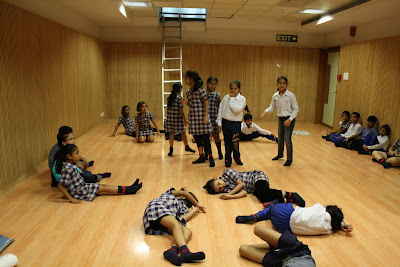 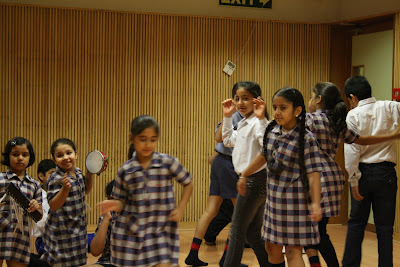 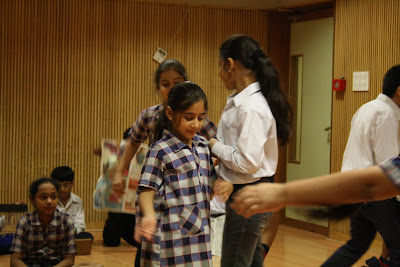 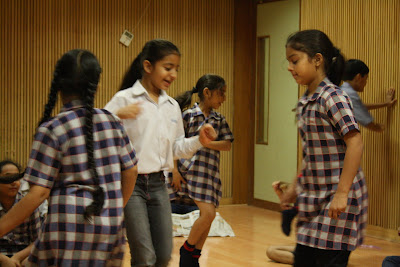 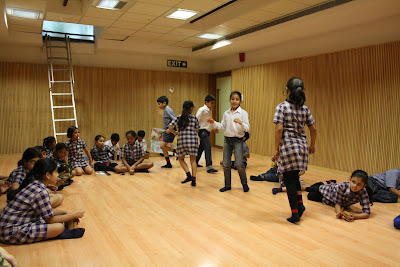 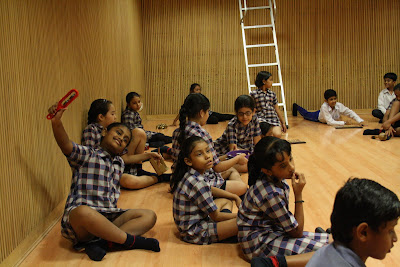 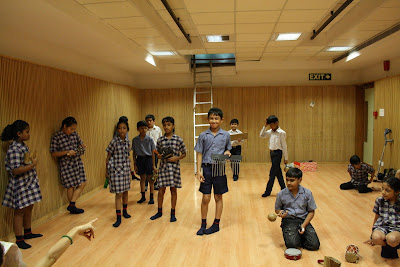 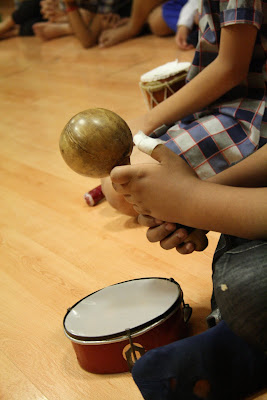 Posted by MANASI LAMBA at 5:09 AM No comments: 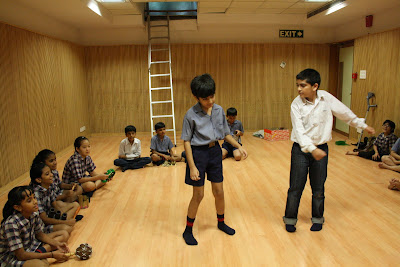 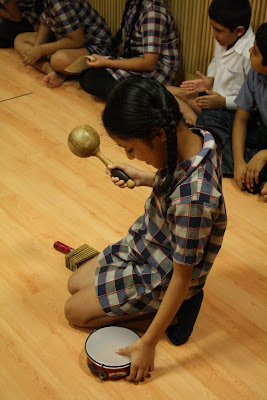 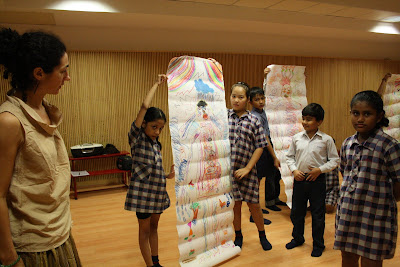 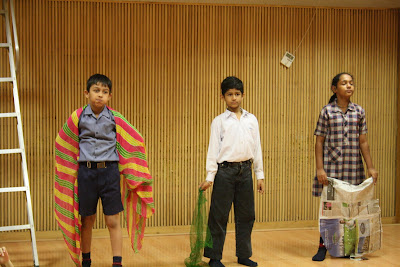 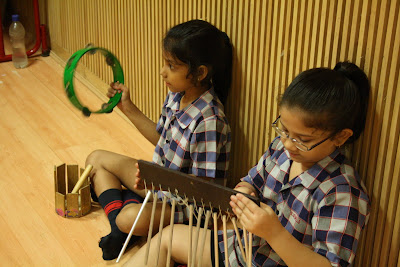 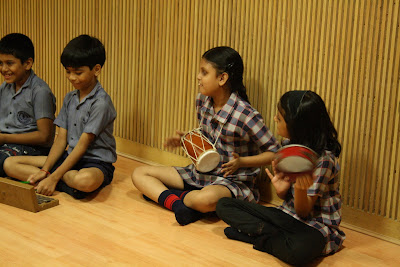 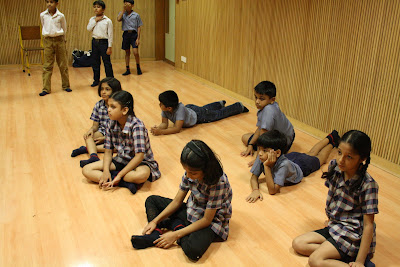 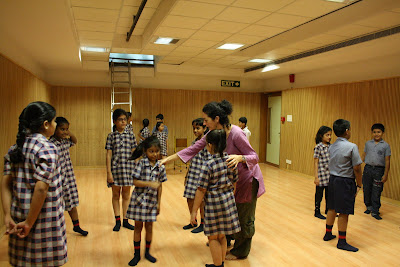 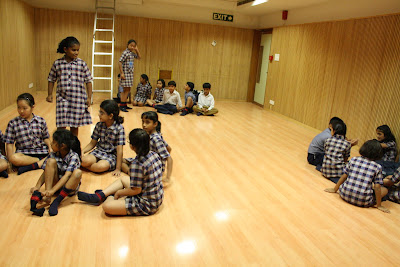 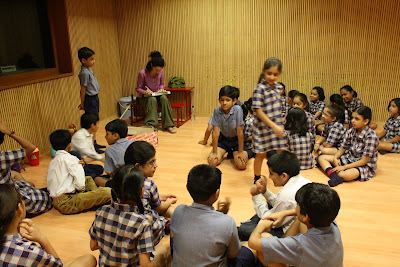 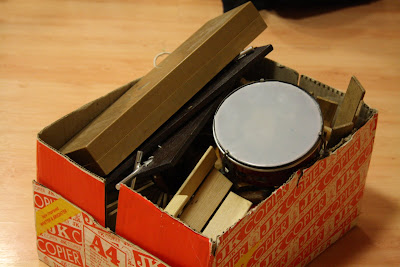 It was the first time that both class 4 and class 3 were together in our sessions. We were to work towards the performance now. The kids are extremely excited and enthusiastic about the performance. We have started taking longer sessions also. We divided them into groups of air water and earth and one group called humans, sticking with their earlier narrative idea. We got MUSIC and percussion in for the first time. The idea is that there is going to be no dialogue and the kids will make their own music. We also brought the other materials in that we have been working with in previous session like, newspaper, cloth, drawings. They are beginning to realise the importance of the past sessions and have started to combine all their leanings.
According to the element we divided the instruments. We asked them to choose what instrument would compliment their movement and feeling of their element. The school has a bunch of extremely unusual and interesting instruments that we are working with. One of the exercises we did in the beginning to get them comfortable with these instruments was conversing with themselves as an element group with no dialogue. Music being their words and expressions. If they wanted they could add a body movement to enhance their conversation they could feel free to do so. We also told them to fell free to pop up and give an opinion or an idea which comes to their minds. One keen idea they have is to draw on stage and to hang paper birds to build up the feeling of a forest.
Only the elements will have instruments, Humans will use their movements and voices to make music and express. Their bodies have become so comfortable to response and move freely. They are not inhibited or scared to say the strangest things because they know we will listen and they are "allowed" to voice out what they think in class. One thing that was amazing to see was how both the classes fed off each other without the discrimination of age or class. The kids enjoy themselves and love to play loud music and get over excited. They are not getting bored because there isn't a structure or a particular tune to what they are playing but the experiment and feed off each others instrument. Even int he middle of the performance they can exchange instruments if they like. There are no fixed instruments allotted to a child so every time they get new ones to play.
On the first day when we introduced music first we made them express with their bodies like the other session and then with music but we didn't ask them to moved. We asked them to freeze in a position of the element and play responding to each other. We told them there are no dialogues in this performance so if u have to say anything to each other either mime it or say it with your instrument. When you don't have your voice then your expression on your face and body language get enhanced because you are trying to convey what u mean in the best way possible so that another person understands. We depend on our voices a lot and when its taken away from us we explore other methods of expressing. The kids were so amazed to see that Beatrice and me could understand exactly what they mean.
Posted by MANASI LAMBA at 3:59 AM No comments:

MANASI LAMBA
I studied Visual communication at the Srishti School of Art, Design and Technology.I love drawing and bright COLOUR :) This blog helps me share some of my work with you.